Isis wrote this letter to Paydirt: 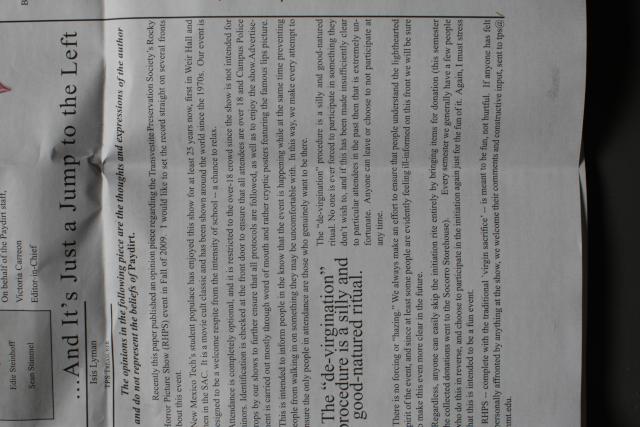 It was in response to this letter: 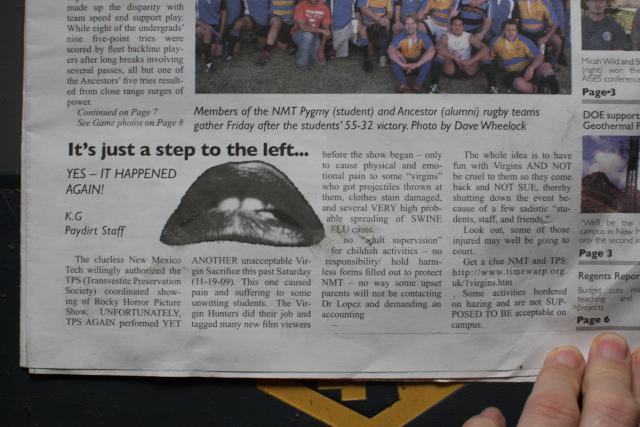 So what can we tell from these two bits of text in Paydirt?

What Isis wrote is clearly marked as an opinion piece. Paydirt put in a boldfaced line which reads, "The opinions in the following piece are the thoughts and expression of the author and do not represent the beliefs of Paydirt." What Isis wrote was also relegated to the second page of the newspaper.

The original article, by the mysterious "K.G." and looking on page 7 at who the staff are...

...there isn't anyone on staff by those initials. So this piece by K.G. appears to be an anonymous piece...by the Paydirt staff.

According to Paydirt it is a fact that physical and emotional pain were caused to "virgins" who got projectiles thrown at them, clothes stain damaged, and several VERY high probable spreading of SWINE FLU cases. None of this is opinion at all, it is all fact. How Paydirt managed to measure the probability of swine flu spread at Rocky Horror isn't detailed in the article, nor the meaning of VERY high, so I'm not sure just how important of an issue this is.

It is presented by Paydirt a fact that there was no "adult supervision" (the quotes around it make the meaning of the phrase ambiguous so we don't know what kind of supervision Paydirt wanted to have) for acts that are considered by Paydirt (remember, that is Paydirt itself, not the Paydirt staff) to be childish activities. Even more amazing than Paydirt's ability to calculate swine flu spread probabilities is their ability to calculate the actions of people with free will and determine that there will be complaints made by parents of students who participated.

And Paydirt is pretty sure that some participants will be suing. Despite Paydirt having solved the problems of viral spread and free will, they haven't figured out a way to tell if people will sue.

Isis finds many of the facts put forth by Paydirt to be incorrect. But she was unable to express herself a powerfully as the newspaper because she relegated to being a disclaimed opinion on the second page, while Paydirt's facts were official true statements made by Paydirt itself on the front page.

Roll over in your grave Mr. Hearst, because there's a new sheriff in town.